Mapping is a way of resolving the object-relational impedance mismatch problem. Mapping informs the ORM tool of what Java class object to store in which database table.

Criteria Queries are provided as an object-oriented alternative to HQL. Criteria Query is used to modify the objects and provide the restriction for the objects. It generates database independent queries so that there is no need to write database-specific queries.

Without this capability, changing the database would require individual SQL queries to be changed as well, leading to maintenance issues. The only strict requirement for a persistent class is a no-argument constructor , though not necessarily public.

Proper behavior in some applications also requires special attention to the equals and hashCode methods in the object classes. Java generics , introduced in Java 5, are also supported. Hibernate can be configured to lazy load associated collections. Lazy loading is the default as of Hibernate 3. Related objects can be configured to cascade operations from one object to the other.

For example, a parent Album class object can be configured to cascade its save and delete operations to its child Track class objects. It can also be included as a feature in other programming languages.

Entities and components[ edit ] In Hibernate jargon , an entity is a stand-alone object in Hibernate's persistent mechanism which can be manipulated independently of other objects. In contrast, a component is subordinate to an entity and can be manipulated only with respect to that entity. For example, an Album object may represent an entity; but the Tracks object associated with the Album objects would represent a component of the Album entity, if it is assumed that Tracks can only be saved or retrieved from the database through the Album object.

Unlike J2EE, Hibernate can switch databases. 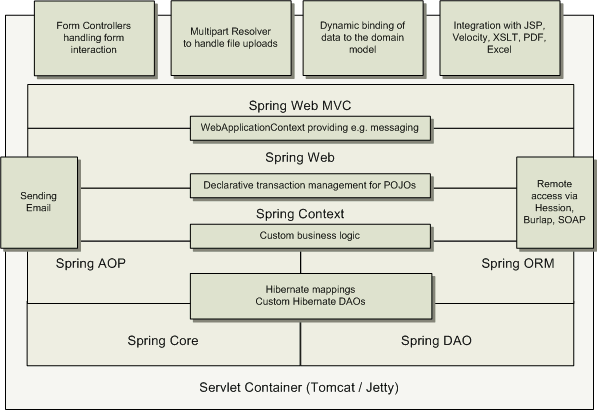 Events in different conversations do not need to be serialized. But access to shared "global" state needs explicit synchronization never, ever use "synchronized" for this, it has no deadlock detection - see Seam's Synchronized annotation for the Right Way to do it. So, given that model, let's see where it breaks: 0 It breaks if I try to modify global state in the conversation: you should never, ever try to associate any globally visible object with a conversation-scope persistence context!

If you have to change a global object, modify a copy, and replace the globally-visible object after the update was successful. IMO, as long as you get your conversation model correct, and you follow 0 , this should be very, very rare to need to do this.

Like, super-rare. I would expect this to be rare in most desktop applications, but in general it is a case that you have got to be able to handle.

Long running processing needs to be done asynchronously, in another thread, and its own conversation. A Seam Asynchronous method is an easy way.

Of course we can't prove that either, but if you don't trust us, why would you want to refer people here? XDoclet 9. The only strict requirement for a persistent class is a no-argument constructor , though not necessarily public. We've streamlined our entire affiliate process to ensure ease of use, while still maintaining extremely accurate affiliate tracking.

BRITANY from Denver
I do like sharing PDF docs actually . Look through my other posts. I enjoy high power rifle.
>